Since Oxford ended, one of my friends who went on the trip and I have been trying to meet up during the summer before university starts in the fall. Today, he invited me to join his family and watch a few matches match at the International Tennis Hall of Fame.
I do not have any knowledge of the tennis world–let alone any other sport–but why not go and spend time with a good friend?
We saw the finals of Campbell’s Hall of Fame Tennis Championship. It turns out one of the players and the winner of the singles tournament, John Isner, will be representing the United States at the Olympics in London, so it was exciting to an Olympian athlete in action.
I enjoyed watching the matches a lot more than I thought I would. I suppose there is quite a difference between being in the stands at the game and staring at a television screen.
Afterwards, we went to dinner at the Canfield House a few doors down from the Hall of Fame. It is right next to Dunkin Donuts on Memorial Boulevard on the way to Apothecary Newport, but my friends and I never stopped in before. We must have passed it countless times before.
It was so hard to choose from the menu, because everything looked so good! I ordered mussels and clams as an appetizer and pasta bolognese as an entree. The Canfield House is now one of my favorite restaurants in Newport. 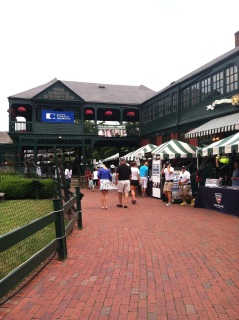 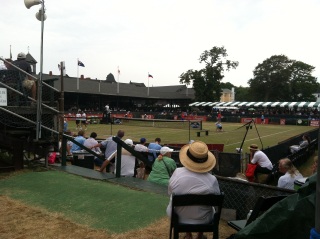 How was this basically a year ago? Time flies too fast ⏱
Sunday feels, brought to you by Bella 💛
First IG post of 2020 📸 I already feel like this year is going to be completely different. At this same time last year, I had a different job and a different relationship status and was looking into moving to a different country. . . . I spent this afternoon in NYC doing things that I would normally love—visiting The Met, window shopping on Madison Ave, stopping at Maison Kayser for lunch, getting *more* coffee... I had a nice time, but it didn’t feel as nice as I thought it would. . . . Maybe I need to book a flight somewhere this spring and go on a new adventure—it’s long overdue ✈️ . . . Pictures from the current exhibit on view at The Met’s Costume Institute
For me, 2019 has been such a transformative year. I don’t even know how to make sense of describing it, but in the end, my biggest takeaway this year is making decisions for myself and trusting that it will all work out the way that it’s supposed to. Between completing my dissertation, graduation, visiting Paris (and hopefully a few other places along the way), and building my business as a stylist, there’s so much to look forward to in 2020 ✨
I’m already back to retail life, but I’m so happy to have family around whenever I come back to Rhode Island 🌊💙✨ Wishing you a very merry holiday season to you and yours! 🎄
Another Christmas moment from the City by the Sea ✨🎄